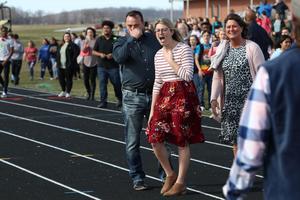 TCCHS surprised at school with a wedding proposal

There could not have been a more beautiful Monday for a proposal: 72 degrees with sunny, blue skies and a breeze.

Students and teachers shuffled out of Todd County Central High School for a mock fire drill just after 1 p.m. Minutes later, a sleek, maroon helicopter hovered and landed on the football field.

Biology teacher Kaylee Belanger, 24, had no idea the hoopla was all for a marriage proposal from her boyfriend, Koby Younce.

“Honestly, when I first saw the helicopter, one of my students said ‘I wonder if someone is being life-flighted,’ and I got scared,” she recalled. “Even when I saw him, I was so nervous and I thought I was going to hyperventilate. Then, I just had a peace come over me.”

The two have been dating since August, said Kaylee’s dad, Wayne Belanger, who was in on the surprise along with Kaylee’s mom, Sarah, and brother, Cody.

“I’m really happy for her,” Wayne said. “I’m tickled to death, but then again, it’s my little girl. It’s just amazing that he went all out of his way to do this; it’s super sweet.”

Sarah Belanger, who also teaches at the school, said it was hard to hold the secret from her daughter. Koby had asked her and Wayne nearly a week ago.

“She made me promise her I was going to tell her when it was going to happen, but then I didn’t,” Sarah said. “I had a teacher friend of mine send out an email that we were going to do a staff picture today, so that’s how we got her to dress up.”

Wearing a maroon skirt, boots and a striped top, Kaylee’s blonde, curls blew in the wind as the helicopter landed.

Koby, a 27-year-old real estate owner from Murfreesboro, Tennessee, stepped out and walked up to his lady. The two hugged as the crowd of TCCHS students and staff clapped and cheered.

“The goal was I wanted her school involved because that was a big part of her life,” Koby said.

To Kaylee, that made it even more special.

“That’s the school I graduated high school from, so going back there and teaching has been an amazing experience,” she said. “Some of the kids have really captured my heart and they mean the world to me. And, the staff is more like a family.”

Principal Deatrik Kinney said he was on board with the idea from the beginning when Koby called.

“I said I’m willing to accommodate you and allow you to fly your helicopter in to do what you need to do,” Kinney recalled. “I’ll get the kids together, fake a fire drill, and make it all the way official.”

Kinney said he wishes them the best.

“I’ve known her for four years, and she’s just a wonderful young lady,” the principal said. “I love her and her family, and I’m here to just support and do whatever I need to do like I would for any staff member here.”

Shortly after the surprise, the couple hopped back in the helicopter and soared toward Smyrna, Tennessee.

Koby popped the question once they landed at Bloomsbury Farms, and later they enjoyed dinner with both of their families.

Kaylee said Tuesday that all her students were so excited to see the ring when she returned.

“I smiled all day today, and my students were so excited,” she said. “Some of my girls said he just set a standard.”

Koby said “this is just the beginning,” and they are planning to get married at the beach.

“He treats me like a queen,” Kaylee said. “He’s my best friend, and I’m excited to get to spend my life with him.”

Reach Zirconia Alleyne at 270-887-3243 or zalleyne@kentuckynewera.com.