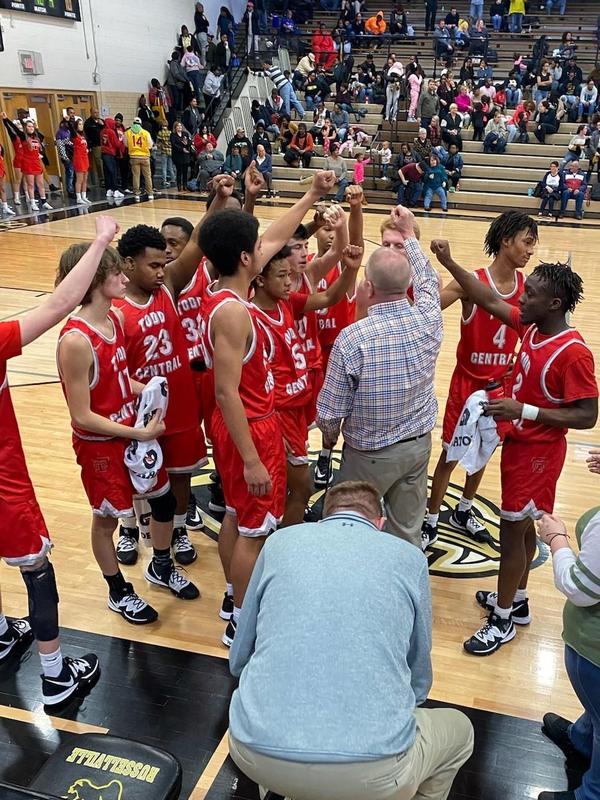 It was a game well worth the price of a ticket. The Todd County Central Rebels locked up the #3 seed in the 13th District Friday night, outlasting Russellville 80-78 in a double overtime thriller on the Panthers home court.

The game was one of those kind of games from the very beginning. With Chaun Cheaney and Jovari Gamble leading the way, the Panthers took a 16-10 first quarter lead. Cheaney had seven points, while Gamble added six more in the opening quarter.

The Rebel offense then found another gear in the 2nd quarter, With Austin Rager finding the range from behind the arc, Todd County Central battled back to send the game to the break all knotted up at 36-36. Rager hit four threes in the quarter as a part of the effort.

Coming back out in the second half, the Panthers battled to take the lead back. When the quarter ended, the Panthers were up 54-50.

The Rebels would not let the Panthers pull away, however, and fought their way back to tie the game and force overtime at 65-65. Neither team was able to put game away in the first extra period, and the overtime ended with the score tied at 73-73.

Free throw shooting turned out to be key coming down to the wire, as the Rebels did enough in the second overtime to pick up the 80-78 win. In the two overtime periods, Todd Central was 13 of 18 at the free throw line, while the Panthers were 3 of 13 at the charity stripe.

The Rebels were led by Dominique Morrow with 21 points. Austin Rager added 16. Deonte Toliver finished with 15 points. Preston Moore also got to double figures with 10.